8. Tell us a bit about your family!

9. What are your hobbies?

Hmmm.. I just realized that the numbers on the questions are off. That will give me MORE than 15 days! LOL

I’ll start with The Hubby. He was born and raised in Nashville. He had only lived in Tennessee until we moved to Virginia 6 1/2 years ago. I thought it was an absolute miracle that he actually took the job in a different state! LOL And now look at us! We’re in Georgia!

We have been married for almost 20 years. He was 21 and I was 18. OH! His Birthday was yesterday. He turned 41 but he LIES about his age! LOL He has some of the kids convinced that he turned 40…. Well, I know better… I have his birth certificate! LOL 😉

He is an avid football fan. His favorite teams are Green Bay and Alabama. He loves to deer hunt and fish.

Oh! He LOOOOOVES B movies! LOL I have to admit, that used to drive me crazy. 😉 But now he has taken pity on me and doesn’t make me watch them with him. LOL Although every once in a while I still will just to make him happy.

Next up is Jacob. My first born. My crazy child! I miss him sooooooooo much. He called yesterday to wish The Hubby a happy Birthday. I was SOOOOO happy to get to talk to him for a little bit. He has to work the day before and the day after Thanksgiving so we won’t be seeing him. WAH!!!! 😦 But he promised to come home for Christmas!!!

Jacob  is my wild child. He is the main reason I have soooo much grey hair!!! LOL I found my first one when I was 21!! You see, Jacob has ADHD and was into EVERYTHING when he was little. I remember one day I turned the washing machine on, put the detergent in and went off to get the dirty clothes. When I came back there was Jacob IN the washing machine! Soap suds had completely soaked into his pajamas!! He was 1 1/2!!!! Then not too long after that I couldn’t find him. I was looking all over the house. Then I hear a faint noise coming from the kitchen. He had crawled into the dryer and couldn’t get out. He was always climbing something or getting away from me. SHEW!!!! And he was always getting hurt. That boy had NO fear!! A complete dare devil! He had to get 10 staples in his foot when he was in 3rd grade! He broke his hand playing football. He had to have his forehead glued once and another time had to have his hair tied together because the doctor didn’t want to put stitches in his head!!!!

Yep… The main reason I have so many grey hairs!! LOL

Then we have Joshua. He’s my genius. Seriously, the boy has a near photographic memory, which is good AND bad. Academics have always been very easy for him and it has made him a little bit lazy. LOL He just wants to read and not work his brain.

He has gotten SOOOOOO tall!!!! He’s now taller than The Hubby!

We Joshua was little he was severely speech delayed. When he was 3 he could only say about 5 words, so he made up his own sign language. He was also VERY attached to me. I couldn’t leave the room without him freaking out.

Now, he loves to read and play video games. Those are his two favorite things to do.

Next is Deanna, my drama queen. LOL Oh, she would kill me if she knew I wrote that!!! 😉 She was very quiet and well behaved until she hit 5 yrs old…. LOL Then it was drama, drama, drama. Even in 1st grade she would argue with me over what she was wearing to school!!! LOL She would love for me to fix her hair. She always knew exactly how she wanted it.

Now, she is a pod person. 😉 That’s my term for teenagers. You know, one day you have your sweet little child and then BAM! They are rolling their eyes and sighing at everything you say…. It’s like Invasion of the Body Snatchers, that’s where pod people come in. LOL

She has a very caring heart and can be very sweet, when she wants to be. LOL The rest of the time is filled with attitude! LOL She is studying toward being an archaeologist.

Next we have my little Cailey-Bird. She is so sweet (she hasn’t hit the pod people stage yet).  She loves to draw and is pretty good at it, too! She LOOOOOVES animals! She used to think she wanted to be a vet but changed her mind when she found out all the yucky stuff she would have to do. Now she wants to own a pet grooming business. I have to say, that would be PERFECT for her!

When she was little she used to put the plastic rings from milk jugs on her wrists like bracelets! LOL It took me forever to get her out of that!

She loves to learn as long as she doesn’t have to do any actual reading or writing…. LOL She’s good at math but hates the tediousness of it. Y’know, the writing…. LOL  But she loves to do projects and arts and crafts.

Last but not least we have Colin. Our big surprise. LOL I had my tubes tied after we had Cailey but God wasn’t finished with our family yet. 😉

He was born 5 weeks early and was sooooo tiny!!! He came so fast that The Hubby couldn’t make it to the hospital in time. I had him all by myself. He weighed 5 lbs 10 oz. Praise God, he didn’t even have to go into the NICU! But he had a lot of jaundice.

From the moment he was born he didn’t want to be put down. I had to hold him constantly. As soon as I would lay him down in his bassinet he would wake right back up and start crying. So, I got a baby carrier and started wearing him. LOL He has always slept in our bed and never wants to leave my side.

He is very strong willed and wants things to be exactly the way he thinks they ought to be! LOL SHEW!!! That can make things quite difficult at times and keeps me on my toes, for sure!!!

He has had a fascination with dinosaurs since he was 1 1/2 and says he wants to be a paleontologist.

Well, that’s my family! My big, crazy, loving family. I would’t change a thing for the world!

Pammy is the oldest at just over 2. Poor Pammy, she has a nervous condition….. And she loves The Hubby the most.

Bonnie is next and is just over 1. She is soooo cuddly and fluffy!!!

The we have Cloud. Our little kitty that we found at the dump. She is such a sweetie!!! And she also loves The Hubby the most… The Hubby is not really a cat lover but he has a soft spot for Cloud.

Well, I think you probably know what my hobbies are… LOL Sewing and reading. Well, crafting, too. I love to make things. I was making my own soap for a while. SO MUCH FUN!!!! I would like to get back into that if I can find the right ingredients around here…..  I like making cards, too. I haven’t done it in a while though and probably need to stock up on supplies for that, too.

Well, that’s it!! Now I have to go try to find Pammy. We let her out for a little bit and she ran into the bushes…. SIGH….. No time to proofread! Please, excuse all my typos!!!

Don’t forget to check out some of the amazing bloggers that are taking part in this challenge! And stop by and give a little love to A Little Unhinged!!!!! 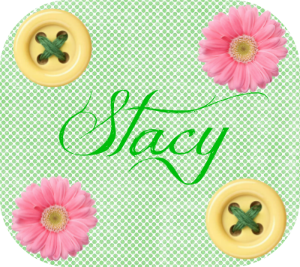